I have been shown how to make a simple fish soup by my mom last summer. We bought a few sea breams for the barbecue and while they had been gutted and cleaned in the supermarket they still had the heads on (normally we wouldn’t buy them with heads) which was apparently a good thing according to my mom. She said she would make a fast fish soup. And so she did. And it was delicious!

So since then every time I buy fresh fish I want the heads too so I can make the soup. I think you get a good deal out of it (two for the price of one, right?) considering you cook the soup and you still have the rest for BBQ.

So I had checked a few recipes on the Internet and then I was going to cook Halaszle – a typical Hungarian fish soup made of Carp and some other fresh water fish but then I changed my mind. I figured it wouldn’t be the real deal without a carp and also I didn’t know which one of the many recipes was the authentic one as I haven’t tasted the real deal yet!

So for now I am making my mom’s version with my input. Like I’ve said I am using fish heads only as it is a way how not to waste any part of the fish. If you fancy putting a whole fish fillet it, feel free to do it. You can also freeze the heads if you don’t have enough right away and make the soup some other time when you gather more fish. 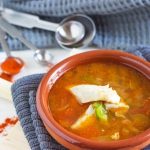 I have been shown how to make a simple Fish Soup by my mom last summer. We bought a few sea breams for the barbecue and while they had been …
Prep Time10 mins
Cook Time40 mins
Total Time50 mins
Servings: 4
Calories: 185
Author: Julia

The heads that have been taken out previously have some meat on them – not much but still, no point to wasting it. I put this meat back in to the soup. However, be careful as there are bones which need to be taken out beforehand. So if you don’t feel comfortable deboning the heads I’d rather leave it. It’s not worth the risk for some small pieces.
Course: Soup
Cuisine: Hungarian
Nutrition Facts
Fisherman’s Soup
Amount per Serving
Calories
185
% Daily Value*
Fat
10
g
15
%
Sodium
140
mg
6
%
Potassium
117
mg
3
%
Carbohydrates
5
g
2
%
Fiber
2
g
8
%
Sugar
1
g
1
%
Protein
18
g
36
%
Vitamin A
1675
IU
34
%
Vitamin C
3.4
mg
4
%
Calcium
14
mg
1
%
Iron
0.8
mg
4
%
* Percent Daily Values are based on a 2000 calorie diet.
** As an Amazon Associate I earn from qualifying purchases.
Tried this recipe?Follow @happyfoodstube and tag #happyfoodstube
LEAVE A COMMENT

« How to Bake a Gingerbread Advent Wreath
Homemade Pizza Dough »