If you have lots of plums on hand make this homemade low sugar cinnamon plum jam! It is low in sugar, spreads perfectly and tastes of cinnamon. A perfect option for those who prefer cutting down the sugar intake!

Guys! Have you ever made plum jam? If yes, what way do you make it? What do you add in it? I have to say that plum jam had been on my TO DO list for a while. My original plan was a bit different though!

So let me tell you a story of a very thick plum jam that in the Czech Republic is called “švestkové povidla”. The thing with povidla is that it is not jam as you know it.

It’s something you normally find in shops in the Czech Republic and also in Slovakia (where I come from). This thick jam is great for baking because of its consistency. It doesn’t go runny, it stays thick and it is not as sweet as typical jams.

I had no idea how to make this thick plum jam and after searching for an authentic recipe I realized there was no proper recipe on the Internet. They all were basically recipes for plum jam. And I wasn’t after that. So I changed my plans and made this no pectin cinnamon plum jam with only a few tablespoons of brown sugar.

It is a nice spreadable jam. When you open the jar you can smell the cinnamon and after tasting you might be surprised by the low level of sweetness. This plum jam contains only a little amount of brown sugar. I didn’t want it to be too sweet.

It is perfect for spreading on sweet breads (banana bread, poppy seed banana bread, challah) or a toast. Sweet breads are already sweet enough so there is no need to make them extra sweet. Keep it balanced with this low sugar no pectin cinnamon plum jam!

Now let’s jump back to thick plum povidla jam. I managed to find some information about thick povidla after I made my cinnamon plum jam!

So this is how it was made:

The authentic thick plum jam would be cooked in a cauldron on a wood burner for several hours. The plums were the only ingredients here. No pectin, no lemon juice, no sugar. Nothing! Just plums! Apparently the plum mixture would thicken naturally when cooled off. When it comes to plums the best ones are the ones harvested after the first frost. They should be over-ripe in order to contain as much natural sugars as possible.

Thanks to an adequate level of acidity and low water content povidla doesn’t go off. And because of this fact the authentic povidla jam doesn’t need to be sterilized. Apparently people would simply pour in into a ceramic container and cover with paper. They would last for several years. It would be so thick that you would need a knife to cut out a piece. Only then you would mix the piece with sugar (or not).

This type of a thick plum jam contains fiber, organic acids and minerals such as potassium, magnesium and phosphorus.

The information about povidla that I have gathered on the Internet is pretty limited. I suppose people don’t talk about is because they don’t make it at home anymore. Sure, not many people have wood burners as well as buckets of ripe plums.

These days it might not be worth the time and effort but if you have a plum tree in your garden and a wood burner (+ a lot of free time), give it a go! Simple de-stone the plums, throw them in and cook for 1 hour, stirring occasionally. The following hour(s) simmer on lower heat until you end up with thicker consistency.

Pour in sterilized jars, put lids on and turn up-side down. Keep until the following day and check if they are air-tight. This would be as close to povidla as you could get. A very thick plum jam that is perfect for baking (it is a very popular topping for Czech kolache – yeast based sweet “buns” as well as other sweet dishes e.g. sweet ravioli filled with thick plum jam.

If you are trying to reduce sugar intake in your foods, this no pectin cinnamon plum jam might be right for you. And also if you have a lot of plums on hand!

All you need to do is throw all the ingredients in a pot, cook for 20 minutes or until the plums are mushy. Strain through a mesh sieve (not too fine otherwise you will end up with plum juice only). You want to remove the skin only so make sure not to waste any mushy flesh.

If you are looking for more preserving and canning recipes, check these out: 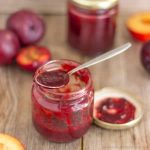 If you have lots of plums on hand make this homemade low sugar cinnamon plum jam. It is low in sugar, spreads perfectly and tastes of cinnamon. A perfect option for those who prefer cutting down the sugar intake!
Prep Time15 mins
Cook Time1 hr
Total Time1 hr 15 mins
Servings: 3 Cups
Calories: 51
Author: Julia

Prevent your screen from going dark

Air-tight sealed jars should last for several weeks, if not months. I advise you to follow current safety standards for canning fruits (jar & lid sterilizing + 10 mins water bath in boiling water once the jars are filled and sealed) especially if you want to can large quantities and you also want to keep your jams for several months. I don’t use water bath for extra safety-sterilization simply because I only can in small quantities and we eat our jams very fast (within 1-3 weeks).
Course: Condiment
Cuisine: International
Keyword: Homemade Jam Recipe, Plum Jam Recipe
Nutrition Facts
Homemade Low Sugar Cinnamon Plum Jam
Serving Size
1 tbsp
Amount per Serving
Calories
51
% Daily Value*
Carbohydrates
13
g
4
%
Fiber
1
g
4
%
Sugar
11
g
12
%
Vitamin A
255
IU
5
%
Vitamin C
7
mg
8
%
Calcium
11
mg
1
%
Iron
0.2
mg
1
%
* Percent Daily Values are based on a 2000 calorie diet.
** As an Amazon Associate I earn from qualifying purchases.
Tried this recipe?Follow @happyfoodstube and tag #happyfoodstube
LEAVE A COMMENT