This easy 30 minute recipe for chorizo potato salad is one of those recipes you will say “yum” to!

Shortly after we moved to Spain Siim made this salad for us. I have no idea where he got the recipe from and neither has he. He thinks it was one of the local magazines but is not sure at all. Why on Earth couldn’t we remember? It wasn’t that long ago!

Off-topic:
Don’t you feel like these days one doesn’t have to remember anything at all? You don’t know something? Well, you simply google it. Phone numbers? No need to remember, right?

How many of you dial an actual number? Our friends and family’s numbers are set in our mobile phones so why bother remembering these. Actually I have to say that even though I have my grandmother’s landline in my phone I never search it. I literally dial each number every time I call. I don’t know why. This is the only number I do it with. Isn’t it strange? And this is basically the only phone number I have “engraved” in my memory. Isn’t that funny? Do you remember phone numbers?

OK, now back to this recipe for potato salad with chorizo & beans:
I have a confession to make: My first reaction when I saw green beans in this salad wasn’t good. I am seriously not a fan of cooked green beans. What can I say? I just don’t enjoy eating them.

But guess what? I liked the whole chorizo/potato/green bean/egg & spring onion combo a lot! I didn’t mind the beans there at all. Well, I think it was because there was my favorite Spanish chorizo in it, which made it pretty good.

Now guys, do you like chorizo? I love it and I use it pretty often. I made Roasted Vegetable Couscous with Chorizo, Twice Baked Potatoes with Chorizo and Cheddar or this Grilled Corn with Pear Chorizo Salad. What can I say? It’s hard to beat this sausage!

But this might be just a matter of taste. Or not… I guess you would have to try for yourselves to see what works better for you.

Anyways, this homemade potato salad with chorizo and green beans is actually very similar to Spanish dish called: Judías verdes con Chorizo meaning green beans with chorizo. Well, I don’t like this Spanish title as it looks like green beans are the main ingredients there. What I saw from a few photos on the Internet, some recipes for this homemade Spanish food don’t include potatoes, some do, some don’t include eggs, some do. But the most important ingredients are the beans.

Now you already know what I think about green beans so I prefer less beans, more chorizo and patatas (see potatoes in Spanish)!

To make this easy potato salad with chorizo you will need a frying pan or skillet and a larger pot. You will need to cook potatoes, beans and eggs. Now there are different types of potatoes on the market and their cooking time varies. I like mine well -cooked but some people like them “al dente”. It’s good to know how long it takes to cook your potatoes as you will be adding egg later in the same pot as well as green beans.

I start with boiling potatoes, later on I add eggs and green beans go in last. Altogether it will take about 15 minutes.

In a frying pan you brown the chorizo with the rest of the ingredients. At last add balsamic vinegar and let it cook off a bit before turning off the heat.

Now it’s time to combine potatoes and beans with chorizo mix, add boiled eggs and you are done! Easy-peasy! This salad is great on its own or as a side/snack.

So guys, if you like tasty quick meals this is it!

Want to see how to make Spanish Potato Salad? Watch the video! 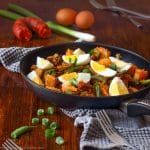 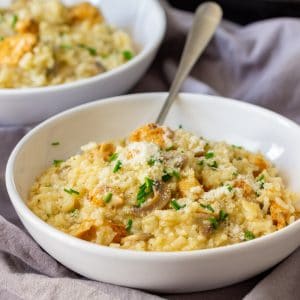 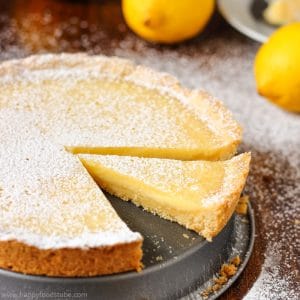 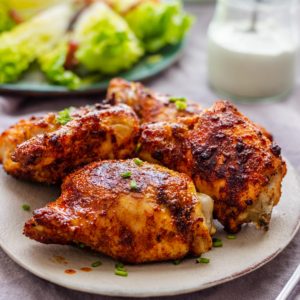